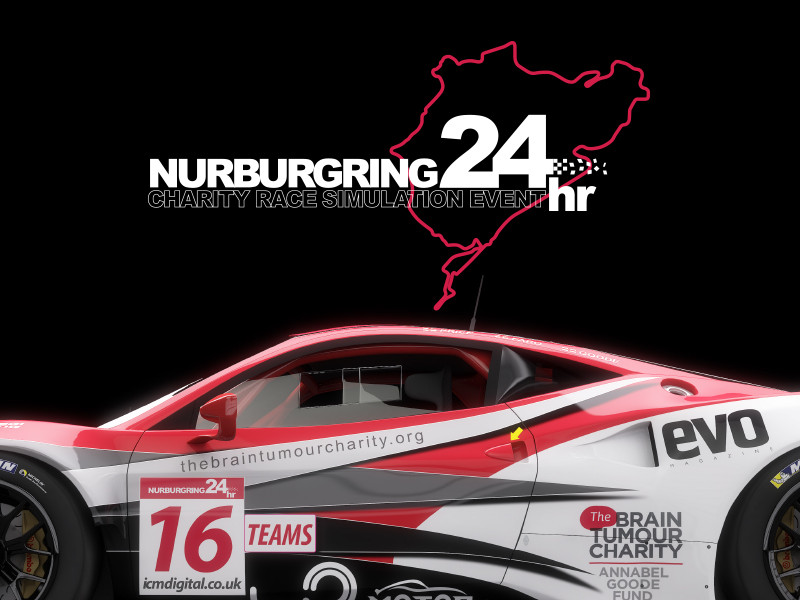 • 120 petrol heads to drive for 24hrs in X16 professional racing simulators in a real time replica of the real Nurburgring 24hr race in Germany.

• 16 Teams will pilot GT3 class racing cars for the 24hr endurance race around the Nurburgring Nordschleife. Flag drops at mid day on the 28th February.

• Rank amateur and professional racing drivers will unite at The Race Hut to compete and raise funds.

Throwing yourself out of a perfectly good aeroplane or entering an Iron Man race seems to be all the rage in charity fundraising circles these days, but for those of us who are more automotivly minded how do you combine your petrol passion with a really good cause?

Considering most forms of motorsport are punishingly expensive before you have even turned a wheel in anger, its not usually the best mechanism for raising oodles of money for your favourite charity.

Dion Price, a certified petrolhead helping out The Brain Tumour Charity (donate here) seems to have come up with a pretty good solution for this as on the 28th of February, 120+ drivers are going to strap themselves into professional grade racing simulators for a 24hr endurance race around the world famous Nurburgring Nordschleife.

16 teams will compete in GT3 racing cars at The Race Hut in Slough, using the exact same racing simulation software (rFactor) that all of the top Formula 1 teams use when honing their latest multimillion euro creations.

At 12 mid day on the 28th of February several professional racing drivers, such as Jake Rattenbury (2014 Lamborghini Super Trofeo Champion), will mix with rank amateurs and seasoned PlayStation addicts to get the event underway.

Driving the fearsome 16 mile track (172 corners) through the night and into Sunday morning the teams with pit for fuel, tyres, driver changes and a few minutes shut eye before charging to the chequered flag at mid day on Sunday 1st March.

Why The Brain Tumour Charity?  Well, its a little known fact that brain tumours kill more children and adults (under 40) than any other cancer. Despite that horrifying statistic, brain tumour research receives just 2% of all cancer research funding!

Current survival rates are also unacceptably low with only 14% of people surviving for 5 years after being diagnosed. When you compare that 5 year survival rate to breast cancer at 87%, it becomes apparent that more needs to be done.

Event organiser Dion Price had this to say: "I think it is safe to say that every motoring enthusiast would love to leverage their passion to do more for charity but the mechanics of the industry are not always conducive to that. This event will allow over a hundred people to get directly involved with raising money for a great cause while having a lot of fun with like minded individuals".

If you would like to get involved in the event, you can donate here or even enter a team as at the time of going to press there were just two slots remaining.

Best of luck to Dion and the team!